Hotel ibis Heroes Square Budapest - in the centre of Budapest 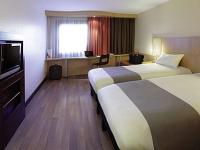