Park Inn**** Sárvár all inclusive wellness hotel SarvarHotel Kapitány**** Sümeg special wellness hotel in SümegHotel Ibis*** Győr with online reservation, and discounted price Hotel Rába*** Győr cheap hotel with online bookingLotus***** Therme Hotel Heviz special thermal hotel in HevizFamulus Hotel**** Győr business and conference hotel GyorDanubius Hotel Bük**** wellness hotel Buk HungaryENSANA Thermal Hotel Aqua**** Hévíz Special thermal hotel in HevizCastle Hotel Hedervary, online booking with discounted price Special thermal hotel in HevizGreenfield Golf Spa Hotel Bukfurdo 4* affordable wellness hotel
The 3-star Hotel Minerva*** is located in the centre of Mosonmagyarovar, only 300 m from the spa. The thermal water of Mosonmagyarovar is recognised as medicinal water, has been ranked among the 5 most effective curative waters in Europe. Due to a renovation in 2004 the hotel awaits its guests with rooms of high standard, an own restaurant and guarded parking places. The hotel – due to its situation – can be an ideal starting point for excursions to Austria and Slovakia. 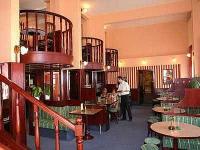