Room of Hotel Regina in Budapest

Hotel Regina Budapest - near to the new M0 highway 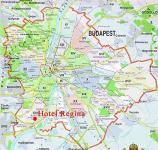