Conference room in Ibis Styles Budapest City near the Danube 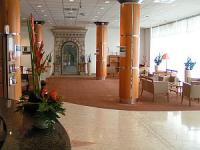