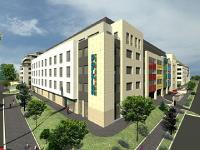 The Hotel Park Inn Budapest thanks to its excellent location, in the near of Vaci street and Duna Plaza, are suitable for satisfying the requirements of both business and leisure travels.

The Park Inn Hotel by Radisson Budapest awaits its guests from 1. July 2012. in the XIII. district, in the near of Duna Plaza and Újpest bridge.
The hotel is located only a few minutes away from the subway station, which gives quickly access to center of Budapest.
The new four-star Hotel Park Inn Budapest superior can be easily reached from the airport from the M0 highway and the Formula-1 Hungaroring is situated nearby, too.
The hotel offers its guests the well-known elegance and comfort, quality services and great value for money.